Harrisburg, PA: New data provided by the Pennsylvania State Police shows that 12,439 adults and 1,057 juveniles were arrested by law enforcement for simple marijuana possession in 2021.

While the arrest total represents a year-over-year decline, marijuana reform advocates opined that the numbers still remain untenable and that they represent a policy that is out-of-step with public opinion.

“While any reduction in marijuana-related arrests reflects positively on our ongoing efforts to change the minds of our legislators, law enforcement, and the courts, we conduct this annual review of marijuana arrest numbers with heavy hearts,” said Lehigh Valley NORML’s Executive Director, Jeff Riedy. “I believe that in 2022 we need to act on honest, comprehensive reforms of our outdated laws and end the prohibition of cannabis. Period!”

The data was provided to NORML Regional Organizer Chris Goldstein from the Pennsylvania State Police upon request, and copies are available.

“It’s clear that cannabis consumers are targeted in Pennsylvania for arrest and the striking racial disparities to enforcement are getting worse,” said Goldstein. “These police interactions over cannabis come with enormous risk, and they have long term consequences – even more so during the pandemic. It’s time to stop marijuana arrests in Pennsylvania, right now.”

During 2021, both neighboring New Jersey and New York ceased cannabis possession arrests after comprehensive legalization laws were passed – historic moves that have left the Keystone State far behind on policy.

Women and juveniles were arrested more often for cannabis possession than for any other substance during 2021 in Pennsylvania.

Juveniles endured the worst of prohibition enforcement in 2021. There were 1,222 people under 18 years old arrested for all substances in Pa. during 2021 and 1,057 (87 percent) were marijuana possession cases. The majority were 16 and 17 years old.

Additional data was provided on juvenile arrest outcomes. Nearly 60 percent of the arrests were referred to juvenile court, probation, criminal court, or even adult court. Only 142 (about 10 percent) of Pa. juveniles arrested for marijuana possession saw their cases handed at the police departments and then released.

While the overall number of arrests declined, the racial disparities among those arrested widened.

Among the 2,952 Hispanic or Latino adults arrested in Pennsylvania during 2021 for all substance possession offenses 1,695 (57%) were for cannabis.

Racial disparities are often presented in ‘per capita’ numbers. Here is that formula applied to this recent data:

The conclusion: Black residents are about five times more likely to be arrested for marijuana possession in Pennsylvania than white counterparts, based on population. This is a major increase in 2021 from 2020 when the disparity was 3.5, a full magnitude lower. 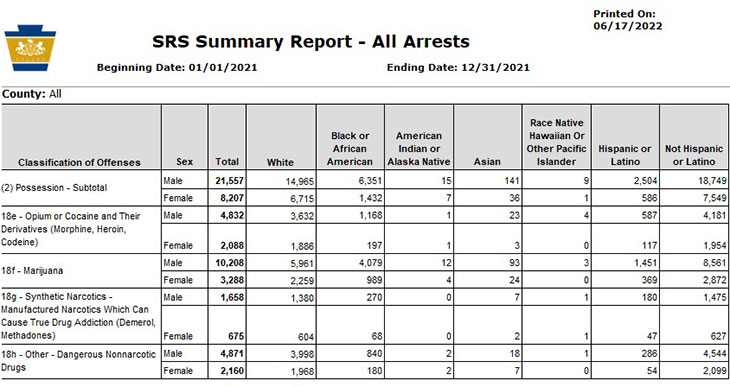 The main factors in the year-over-year decline between 2020 and 2021 were lasting effects of the COVID19 pandemic on the public and policing, along with the impact of dozens of municipal marijuana decriminalization or penalty downgrade ordinances across Pennsylvania.

Philadelphia became the first major city in Pennsylvania to decriminalize marijuana possession offenses in 2014. Since then, more than a dozen cities — including Harrisburg — have followed suit with penalty downgrade ordinances.

Not all of these ordinances have been fully implemented. For example, Lehigh County District Attorney Jim Martin refused to allow Allentown police to stop marijuana arrests, even after a decriminalization ordinance was passed by City Council.