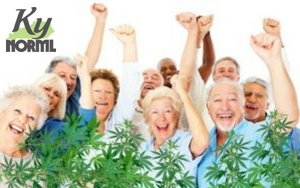 There are approximately 700,000 senior citizens in our state. The Kentucky State Data Center at the University of Louisville found people age 65 have grown 23 percent since the 2010 census, while the number of people younger than 65 has declined and they account for over 15 percent of our population and growing.

In the past few years researchers have been looking into how cannabis therapy is both safe and effective among elderly patients diagnosed with chronic pain, according to clinical data published online ahead of print in the European Journal of Internal Medicine, “[a]fter six months of treatment, 93.7% of the respondents reported improvement in their condition and the reported pain levelwas reduced from a median of 8 on a scale of 0-10 to a median of 4.”

Investigators with the Alcohol Research Group assessed trends in marijuana use between the years 1984 and 2015. Authors reported that, compared with older Americans 30 years ago, older respondents today are some 20 times more likely to acknowledge using cannabis. This suggests the stigma of cannabis from drug war propaganda has been eroded and education is reaching seniors.

“We found that rates of use among older groups increased quite significantly since the 1980s, especially for men in their fifties and sixties,” the study’s lead author stated in a press release. Their finding is consistent with those of other studies reporting upticks in cannabis use by seniors.

Separate data presented this week at the annual meeting of the American Geriatrics Society finds that as many as 65 percent of older adults reduce their use of prescription painkillers after initiating medical cannabis therapy – a finding that is consistent with those of numerous other studies assessing marijuana substitution patterns in various patient populations.

Seniors, with the benefit of life experience, professional knowledge, and 20/20 hindsight, are potentially our strongest allies in the fight to end Marijuana prohibition. We urge our Commonwealth’s seniors and their loved ones to take action and contact their state representatives by calling 1-800-372-7181 and letting them know they support cannabis reform in Kentucky.

To support KY NORML you can DONATE HERE and follow us on Facebook and Twitter! Your donations help pay the bills and allow us to function and continue to make a difference in our state! Can you kick in $5, $10 or $20 to help us keep going?